WIP Wednesday - Train on the Tracks

*looks around furtively* Uhm... this test-knit seems to have taken over my life. I have knitted absolutely nothing else all week! I love it! The pattern is neat, the yarn is awesome, and I'm having so much fun trying out colourwork for the first time! It's yet another of Cordelia's designs (she also did the ladybug sweater I tested earlier this year), and she hasn't let me down yet :) 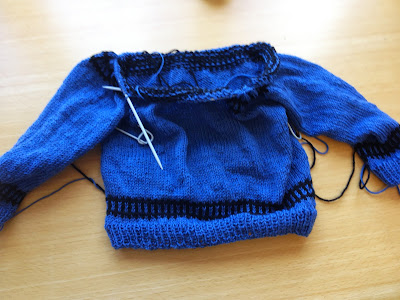 This photo was taken yesterday morning. Since then I knit another 5 rounds... and then promptly had to rip out the last three! I had finally gotten to the point where I was starting on the actual train... only to realize that the main difficulty in knitting colourwork isn't keeping all 5 skeins tangle-free (though that's a task in itself), but making sure that you don't accidentally pull the strands too tight when moving from one section of a colour to the next :-P And of course there's no salvaging that once it's gone wrong. So three ripped out rows, 128 picked up stitches and one phone call to my Mum later and I feel ready for a second attempt... tomorrow ;-)
Posted by Maria at 12:54 AM 7 comments:

Three WIPs this week. Yes, I've added another one ;) I found a test knit that I just could not resist and am once again hijacking on of my nieblings to knit for ;) No pattern page on Ravelry yet, so nothing to link to, but this is Train on the Track... or my two-day progress of it anyway :) 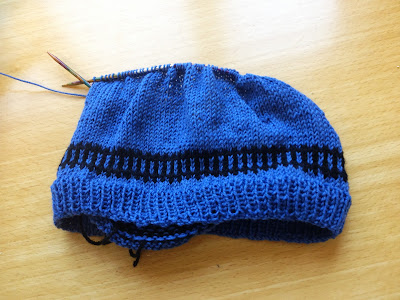 I've finished the first sleeve of my 80s sweater. Haven't yet cast on for the second one, as I wanted to get a proper head-start on the test-knit, but at least I managed to sew in the ends of the sleeve. 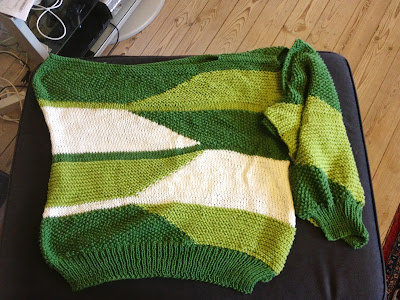 .
Last week Spinster Beth asked if it had big floofy sleeves - yes, it definitely does! 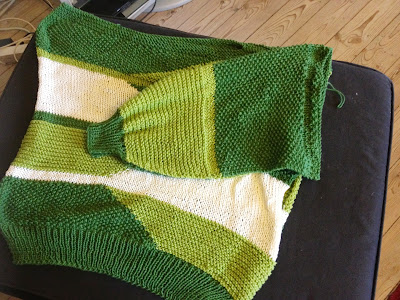 Unfortunately the Moss Garden KAL has hit a major snag - I don't have enough yarn! I didn't do a gauge check as that's seldom necessary for shawls, and that definitely came back to bite me here. I still have another 15 rows to go including the BO, and only another 12 grams of yarn!

Now what to do??? the way I see it, I have two options. I can make yet another colour change. I have no more of neither the blue nor the green yarn, but this grey is also Candy Skein and might work? Assuming I have enough of THAT of course. I only have as much as I did of the blue. (They're both left-overs from my Elfe-top. 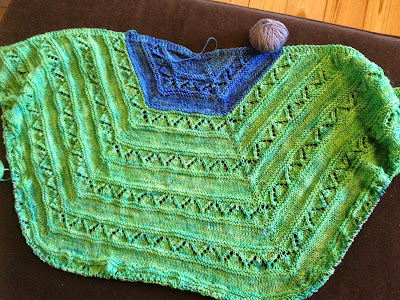 Or I might use this blue instead. It's not quite the same colour as you can see (nor the same yarn this is Champagne from Grignasco instead) but since the green comes between it might be close enough that nobody will notice. 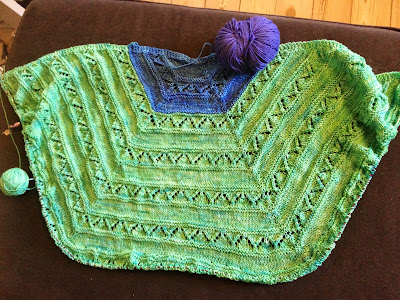 Or... I give it up as a job badly done and frog it. Honestly, I think this is what I'm currently leaning towards. I love the pattern, but I was already iffy about it because of the original colour change. It just didn't work the way it did in my head. Besides, it's Candy Skein... a yarn yummy enough and expensive enough that it deserves to be used for something I love rather than for something I just sort of like. On the other hand, I know from experience that you never completely know what you think of a project until it's finished and blocked. I wasn't too keen on Frost Flowers either, but ended up absolutely LOVING it once I saw it blocked.

Hmm... For the time being I've put it on the back burner, to prevent myself from making a decision based on emotions rather than logic. After all, there's no rush either way. The KAL doesn't end until July 15th, so I can afford mulling it over for awhile longer.
Posted by Maria at 11:23 PM 6 comments:

WIP Wednesday - Now for the sleeves!!

I finished the front of my 80s sweater this weekend, and even went so far as to weave in all the ends right away! I hate weaving in ends, so I knew I'd be better off just getting it out of the way immediately. But that means I'm now onto the sleeves! Only gotten half of one done so far, but it's coming along nicely :) 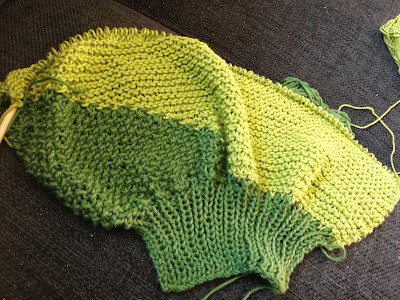 However that means I haven't really been working on my KAL at all. Didn't even manage one full repeat of Chart A since last week. But at least I'm now on my last repeat of Chart A and get to move on to Chart B soon! :) 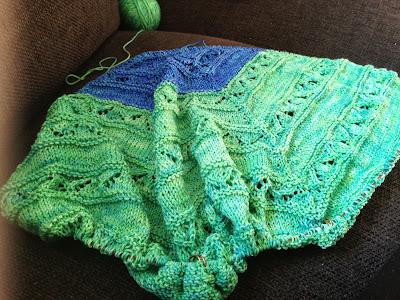 It's been awhile since I did one of these, but since it doesn't look like I'll be posting a FO Fridays post any time soon, I thought it was appropriate :)


Top Ten Knitting/Crochetting Projects I Really Want to Do Sometime Soon
... Leaving aside for the moment that I don't yet know how to crochet and that I have somewhere around 5 WIPs going on at the moment ;)

In no particular order... 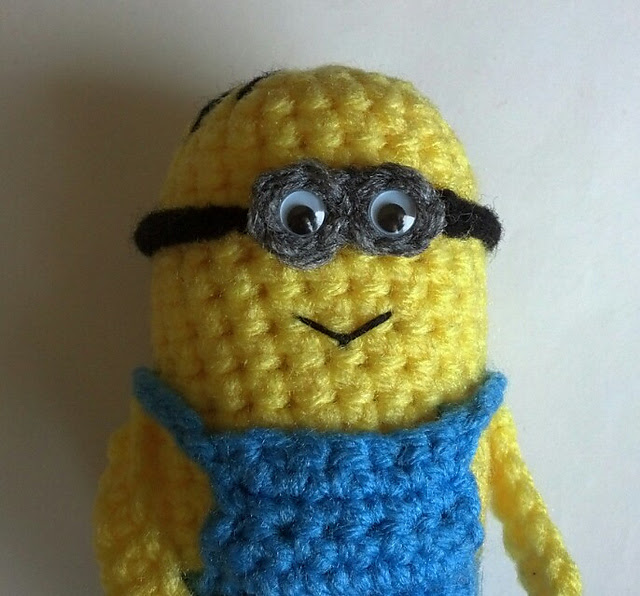 Amigurumi Minion How adorable is this? Of course I have to make this for Lars! I think even he might be pleased with getting a stuffed toy for once ;) So as you see - I have to learn how to crochet! 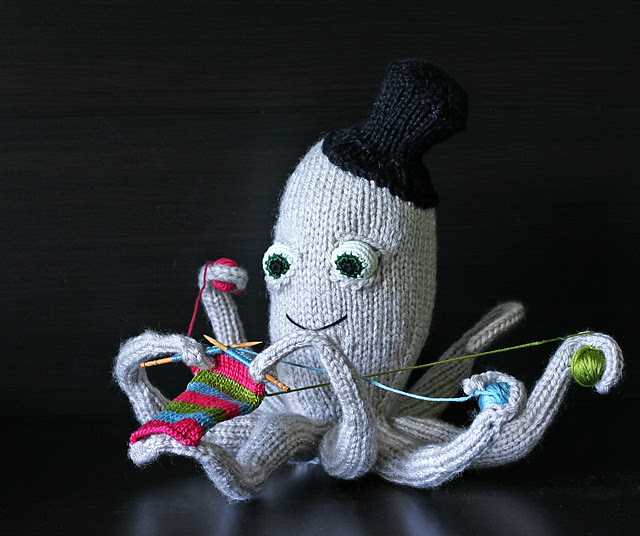 The Knitting Octopus Another in the "how cute is this?!" category. 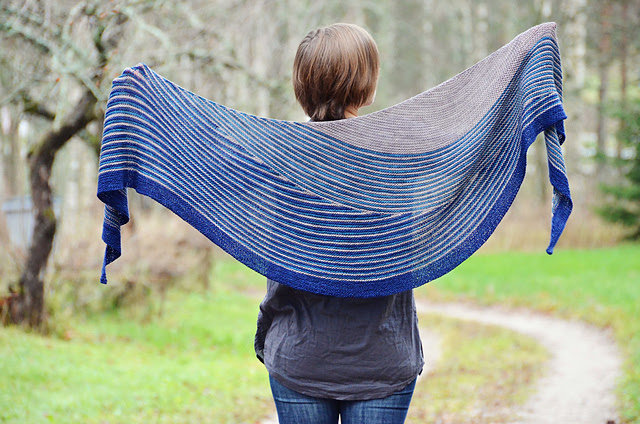 Color Affection 9075 Ravellers can't be wrong ;) Honestly, I had no desire to knit this at first - it was too popular and that put me off it. But then I saw it IRL... and I was sold. Now I know I have to make it! 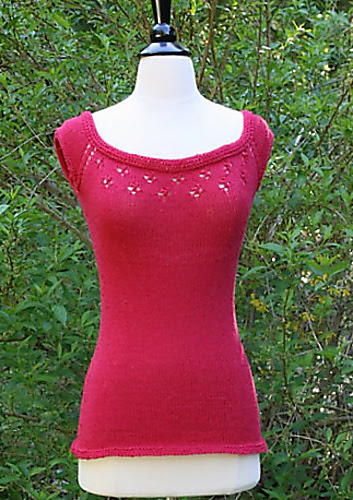 Maxine Tee Simple and gorgeous. And as it's knit in the round it shouldn't take too long to knit either. 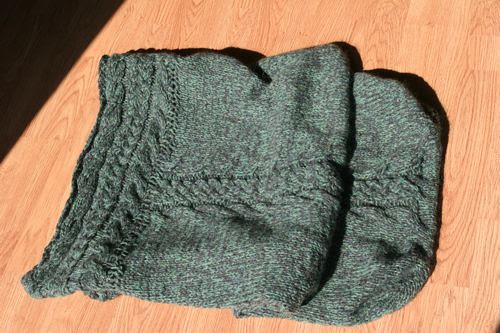 Wombat Blanket I regretted not having this available last winter. It would have been perfect to use when sitting on our couch. I tend to get really cold feet very easily and like snuggling them under a blanket - even when the rest of me is nice and warm. I've actually already bought the yarn for this, so it's just a matter of getting started ;) 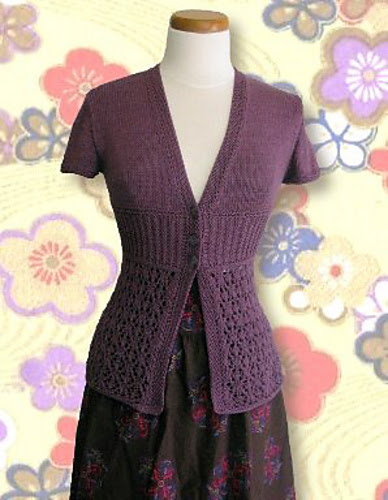 Fleurette Jacket Not sure I could actually pull off wearing this, but it's SO gorgeous! 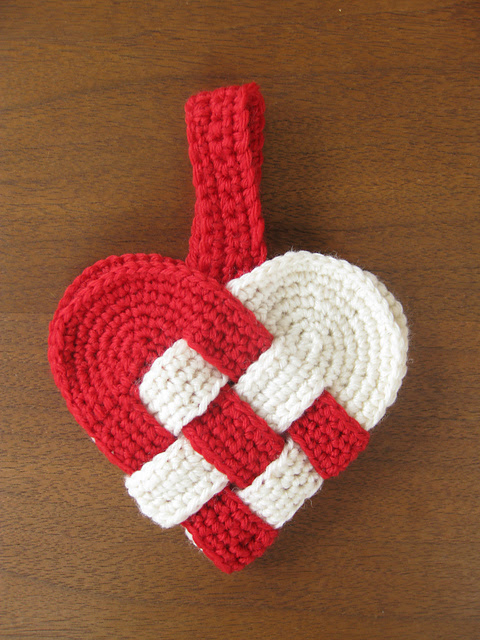 Danish Heart Folded in paper, these hearts grace pretty much every Christmas tree in Denmark. Obviously I need a yarn version as well :) 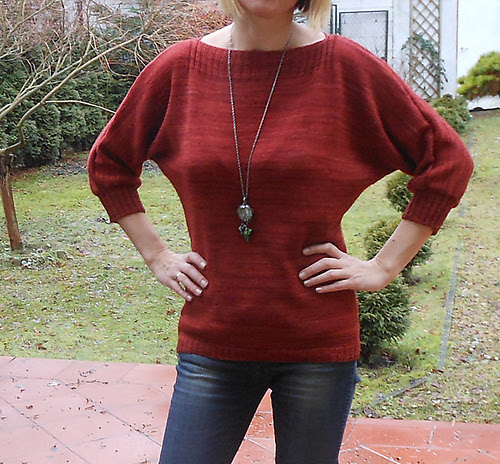 Boticelli Red This would look awesome on my oldest sister :) 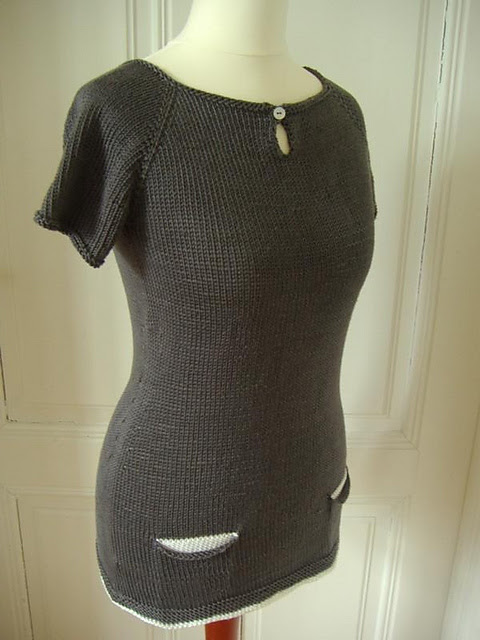 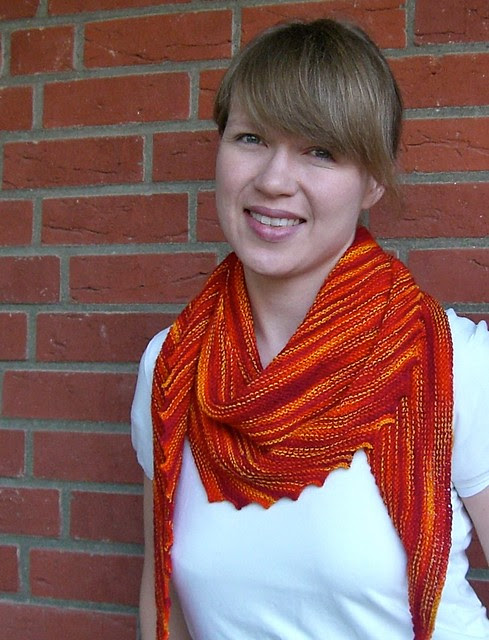 Hitchhiker It's funny, I pretty much never wear shawls, but I love knitting them. Besides, this one looks as if it would be as much fun to knit as the Wingspan... and with a name like that, how can I resist?
Posted by Maria at 11:38 PM 4 comments:

I have a feeling it'll be awhile before I have another FO to show you. Both of my WIPs are lots of fun to knit, but they do take awhile...

First the Moss Garden KAL. I like the colour change more now than I did when I posted last week, but I still wish I had had enough of one colour for the entire shawl. I still think it may end up looking good once I'm done though :) Just 1.5 more repeats of chart A to go :) 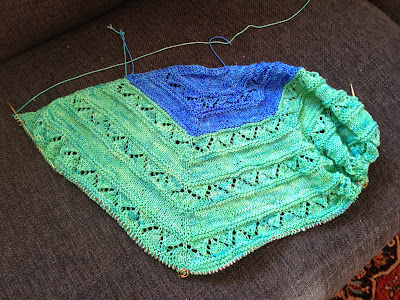 After a brief pause while I got properly going on the KAL, my sweater has taken off again, and I'll hopefully be done with the front by next week. 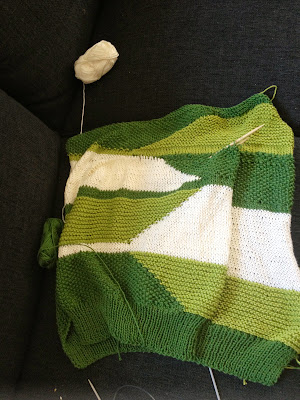 I'm looking forward to having this one finished. I think it'll be a nice sweater to wear when sitting outside on the cool summer evenings :)
Posted by Maria at 2:53 AM 6 comments: