Stashdash started this past Friday, so I finally have some finished items to show off!

First of all, my sunset Doodler. I absolutely love the way this turned out, and despite the looooooong rows near the end (almost 600 stitches!) it was a fun knit :-) Binding off was less fun though... casting off 580 stitches with an icord bindoff took 3 entire episodes of Bones! But now it's done, and I love it :-D 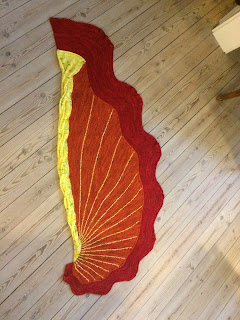 This past weekend I stumbled across a testknit that I just HAD to sign up for - three fruity coasters :) I knit them out of fingering weight yarn rather than worsted, so they're somewhat on the smaller side, but still large enough for most of our glasses, and even Lars thought they were cute :-) The pattern only listed the kiwi, the apple and the watermelon, but once I'd knit those three, I just HAD to try my hand at an orange as well. And really, once you have the basic shape down only the sky's the limit. I'm definitely planning on making a few more... a lemon/lime, a feijoa... have to figure out what else. 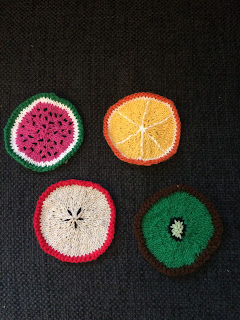 They only took 45 minutes each to knit and then another 5-10 minutes for the embroidery, so very quick gift ideas!

Finally, I finished my first pair of socks of 2017!!! I know! I was really shocked too! I think I overdid the sock knitting a bit last year, so needed a bit of a break. But now I'm back! 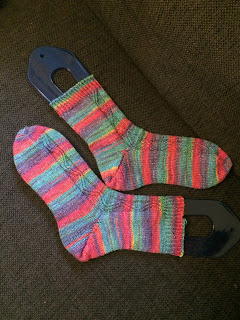 As for works in progress.... I'm still knitting on the Elphaba pullover and finished the first sleeve last Friday. Haven't quite gotten around to picking up stitches for the second sleeve yet, but it'll come :) Unfortunately (but logically) the sleeves pool in a very different way than the body did (which makes sense, since the circumference is so much smaller), but I figure that at least the two sleeves will pool the same way, so it should be alright. 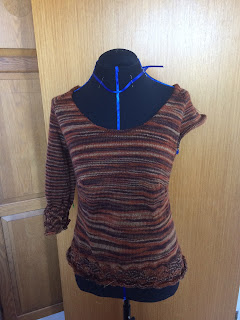 While I was procrastinating picking up those stitches, I picked up an ooooold WIP that I haven't touched in about 6 months. I'd gone off the original idea, so repurposed the project for a seamless baby sweater where the stitchcount fortunately fit perfectly! I'm knitting this out of Opal scraps but will try to at least make the two sleeves match just a tad. I'm hoping it won't look much too crazy when it's done, but right now I actually sorta love the wild colours of it :-) 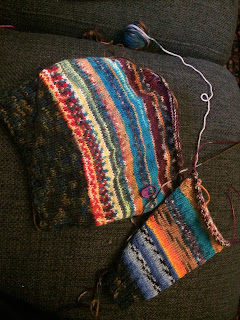 And because I didn't have enough other things to knit on (I don't even want to TRY to count my number of active WIPs right now!) I cast on for an Entrelac baby blanket. This is my first attempt at real entrelac (rather than just modular knitting) so I was quite keen to try my hand at it. It's a LOT easier than it looks, but man I'm glad I know how to knit/purl backwards, or all the turning would drive me nuts! No clue who it's for yet - I'll wait and see how it turns out ;) 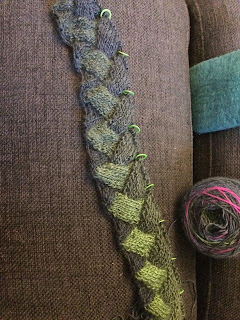 My Favourite Things cowl is on a bit of a hiatus. I still absolutely love how it's turning out, but it requires a much higher level of concentration (obviously) and after having knit on it pretty much constantly for 2 weeks, I needed a break. It hasn't been packed away in a project bag though, and I keep picking it up and admiring it, so I'm sure it won't be too long before I'm ready to pick it back up again. 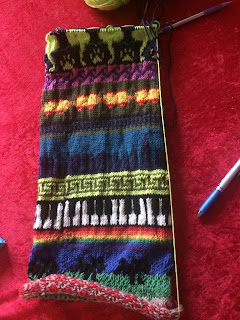 Since I needed something more straight-forward I got back on knitting my Elphaba, and am now done with the main part of the body and ready for the lace section! I added 10cm to the length of the body (as I'm really not a fan of cropped tops on me any longer... I'm getting old!) and am really happy with how that turned out. The lace should add an extra 10'ish cm, so unless my gauge is a lying liar who lies it should hit right where I want it to. 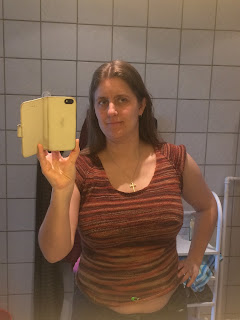 Of course, reaching the lace on the Elphaba means that that is no longer mindless knitting either! So I finally stopped procrastinating and picked up the 3 billion stitches for the last part of the Doodler (okay, only 324, but still!). It was every bit as tedious as expected, and even worse, something went wrong with either my count or the patterns count, so I picked up 24 too many, and had to figure out how to decrease them back down on the first row :-/ But now it's DONE and I can continue knitting the looooong rows (now up to 452sts and counting). 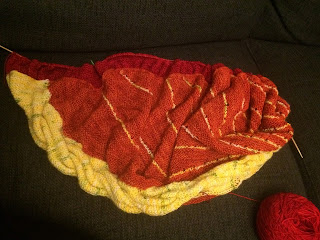 I've just finished wedge 1. According to the pattern I should have enough for all 4 wedges, but we'll see... I'll keep weighing after each one, and make my decision once the 3rd one is done.

My WIP Wednesday post this time comes courtesy of Michala and my youngest nephew :-) Mixi sent me this photo yesterday, and it's just too good not to share ♥ 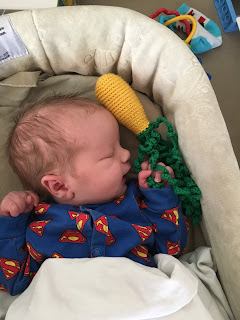 My other current WIPs are in the boring can't-see-any-difference stage, so I'll just leave it at that for this week :)