I don't have too interesting a WIP Wednesday post today, as I've been knitting on exactly the same things as last week. However, that just makes the progress extra obvious, so I'll post photos anyway.

The simple ribbed socks - I've just finished the first one, and am ready to cast on for number two. 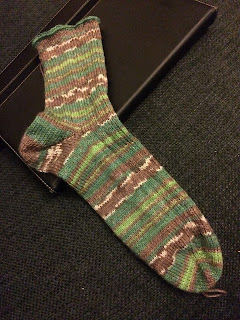 Looks like I get about half a repeat done a week on the Feather and Fan scarf. I'm still not quite half-way, but at least I haven't neglected it completely either. 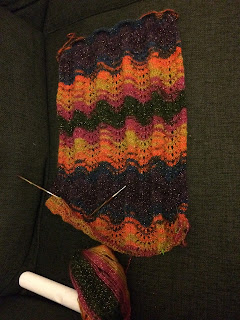 I've knit another 4 hexagons (or starfish) for the Polygon blanket. I'm going to start out with three of each colour, and then decide from there how much larger I want to make it. 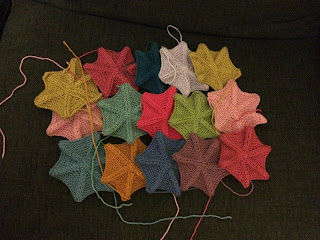 And finally, I've done a bit of knitting on the Paradise Cardigan. I decided to just go head with the sleeves, and have managed two more stripes there. Not that much, but I've actually deliberately put this aside to focus on my obligation knitting, so I don't feel too badly about that. 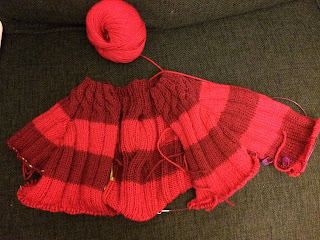 (The colours are WAY off! My camera really doesn't like the lighter red!)

... and as always I have a TON of other things I want to cast on ASAP. I want to get the socks and (most of) the scarf out of the way before casting on anything new though... we'll see how long that lasts.
Posted by Maria at 3:06 AM No comments:

This has been a knitting-heavy week, and I've got a lot of knitting done on several different projects.

First of all, I frogged the socks I'd cast on last week. I didn't care for how the yarn and pattern worked together, and found myself procrastinating from picking it back up. Not worth it. Instead I cast on a simple pair of ribbed socks, and it's coming along much better :-) 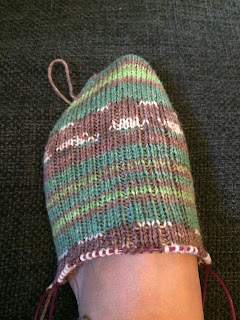 They look a tad small despite being my usual 64sts socks. I'm thinking that's probably just because of the ribbing, but should probably try them on before I get to the heel, to see if I'm knitting for myself, or making a pair for someone else ;-)

I've gotten a bit more done on the Feather-and-fan scarf I started last week. It's exactly as boring to knit as I'd feared, but thanks to the gorgeousness of the yarn, I don't mind too much. Still, I need to get a move on if I want to finish this by Liz' birthday. Although I know she'll understand if it's a tad late. 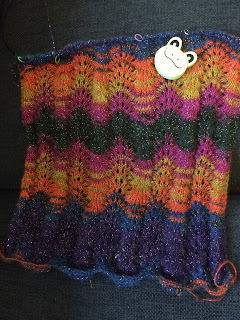 The hexagons for the polygon blanket is coming along nicely and I've knit 10 so far :-) Still haven't decided how big I'm going to make the blanket - for now I'm just enjoying the knitting. Each hexagon takes me about an hour to knit. 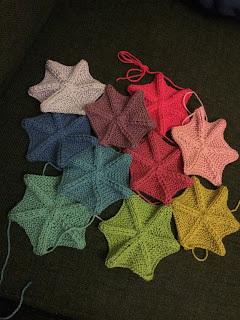 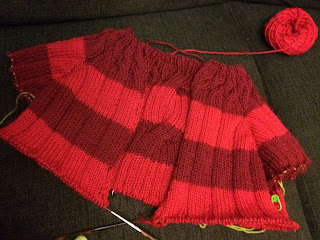 I've separated for the sleeves and am trying to make up my mind whether I want to continue with the body, or take a page out of Jasmin Knitmore's book and knit the sleeves first, while the body is still relatively small and manageable. I think I'll do one more stripe and then decide :)