I gave Rosa her poncho last week, and fortunately she loved it! She even insisted on wearing it for Mum's birthday party which of course warmed my heart to no end. It fits her well, I think :-D 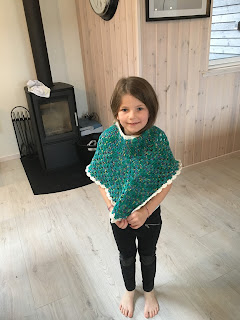 I've pretty much only been working on one thing this past week though - my Chromatic sweater. It's coming along nicely, although the body still has quite a way to go yet. I DO hope the yarn softens up when washed though, or I'll probably never wear it as it's rather toothy :-P Looks good though :-) 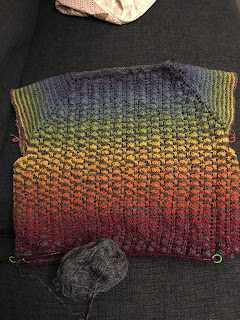 I finished the poncho for Rosa. I had to do a bit of fudging with the numbers as the pattern doesn't actually go up to her size, but hopefully it'll fit her. I get to see her later today and should be able to get her to try it on right away. She put on Nora's last week and claimed that she NEEDED one of those, so I'm pretty confident that she'll like it ;-) 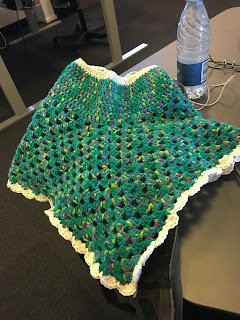 Saturday Mixi texted me to ask from Nora if I'd make her a crochet octopus like the one I'd made for Frederik. It's the first time Nora has actually asked me to make her anything (which makes sense - she's not that old yet!), and of course I said yes right away. "What colour do you want? I have yarn in red, yellow, green and purple." "BLUE!!" ... alrighty then! Time to go stashdiving. Fortunately I had just enough, so a blue octopus it is :-) 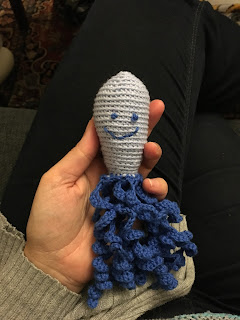 And in whatever time I had left between the two crochet projects, I've been working on my Chromatic. Though the lace is really easy, it still takes longer than just plain stockinette, so I'll be working on this for awhile yet. 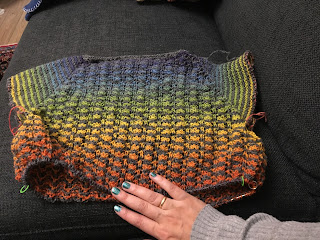 I don't think I ever got to show this off as a WIP, but after having tried on her sister's "dragon mitts", my oldest niece also wanted a pair! Of course I agreed to knit them for her... and when she texted me last week to hear if I could add thumbs I couldn't let her down but had to figure out how to do that as well! :) Wasn't too hard, fortunately. I had to rip back once as I'd added too many short rows, but after that it worked fine :) I just need to weave in ends and block it, and then it's ready to hand over to her next week. 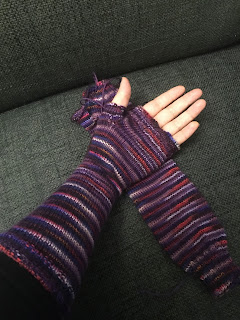 I've also started a new poncho for another niece. Rosa tried on the one I'd made for Nora and wanted one of her own, so of course I had to get working on that. The pattern doesn't come in large enough sizes, so I'll be adjusting as I go - hoping to end up with something that at least somewhat fits her. 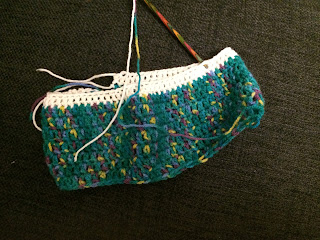 Despite the fact that I still have 12 semi-active WIPs on the needles, I really wanted to cast on something new, so decided I was entitled to a "Birthday Cast On" (in the spirit of the PrairieGirls' Mother's Day Cast On) and cast on the Chromatic pullover by tincanknits! While I did swatch, I didn't actually block it, so we'll see if that comes back to bite me :-P but for the time being, I'm really enjoying the knitting. I worked on pretty much nothing else all weekend, which means I've just separated for the sleeves and am making my way down the body. The lace is really easy to memorize, and I love seeing the colours change! 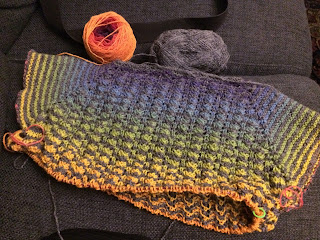