It's been weird lately... I've had heaps of time to knit, but haven't really felt much like it. I needed something that required quite a bit of focus, as most of my knitting was just too mindless. At the same time it had to be something fairly small, as I did not feel up to the task of tackling a large sweater or shawl, so both of the WIPs from the last post were out too.

Instead I had quite a few days with no knitting at all, and then just finally decided to cast on something new. I'd discovered that the level of focus that e.g. solving a difficult sudoku takes was perfect! It required almost all my attention but in a very limited space, and thus seemed approachable. So I set my mind on finding the crafting equivalent of sudoku! I knew it would probably have to be crochet, as I'm still very much a beginner there, so searched through ravelry for something suitable, and finally came across the Fiesta Square - basically it starts as a mandala and grows into a small blanket. Lots of stitches I'd never seen before, lots of techniques I had to google - Perfect! 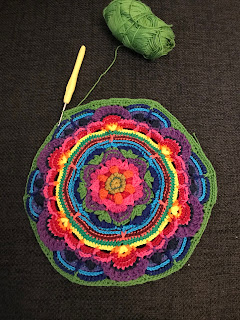 And it really was. The first 3-4 rounds took me about 2 hours to complete as I had to google everything and check out tutorial videos. Alas... apparently I'm a quick learner, and now it's not nearly as difficult any longer :-P I know - I know, that sounds like such a humble brag, but it did kinda defeat the purpose. Ah well - I'm still loving the way it's turning out, and am having lots of fun making it regardless.

I also turned to my spinning wheel for awhile, and actually managed to finish a small skein! I'd love to take a class at some point, and get some pointers. I'm 100% self-taught and KNOW I'm making a ton of mistakes :-P 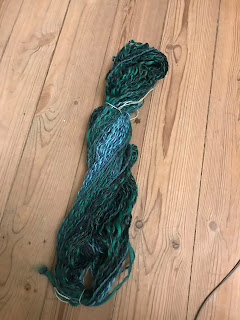 Now that I'm feeling better and have gotten more used to the situation, I've been able to pick up a few older WIPs as well - still nothing mindless and nothing too big, but at least things suitable for TV knitting.

I've finally reached the applied edging for the Turtle Trail Shawlette :-D I still have quite a ways to go yet, as applied edgings take FOREVER, but I don't mind as I actually really love working with this yarn! It's a mystery yarn that Liz gave me last year sometime, but I'm absolutely certain that it's got at least some possum in the mix. It's got that delicious softness that makes it so instantly recognizable! Unfortunately it didn't turn out quite as big as I'd hoped, but blocking should give me enough added length that it'll still be useful. Of course I'll finish it just in time for summer, but at least I can look forward to wearing it next winter :) 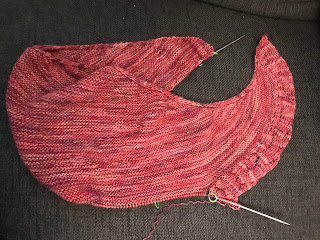 After a break of probably a few years(!!!) I also pulled my Vivid blanket back out again. The lace is detailed enough to keep my focus, while each square is small enough that it doesn't feel like too huge an undertaking, and I actually finished three more squares over the weekend! So that's put me just over half-way through and strangely keen to FINALLY finish it :-P I have enough for 30 - perhaps 36 squares, so that should make quite a nice lap blanket. 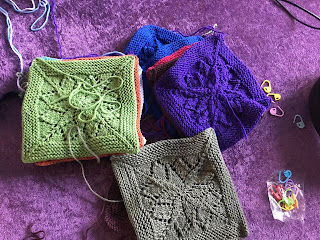